Heyo! You found a not very hidden page! Look around, enjoy some bonus stuff.
You can find some concepts, plans, my process, and a sneak peek of the first episode. Most of these sketches are very outdated when it comes to lore. But they are still used for future ideas. 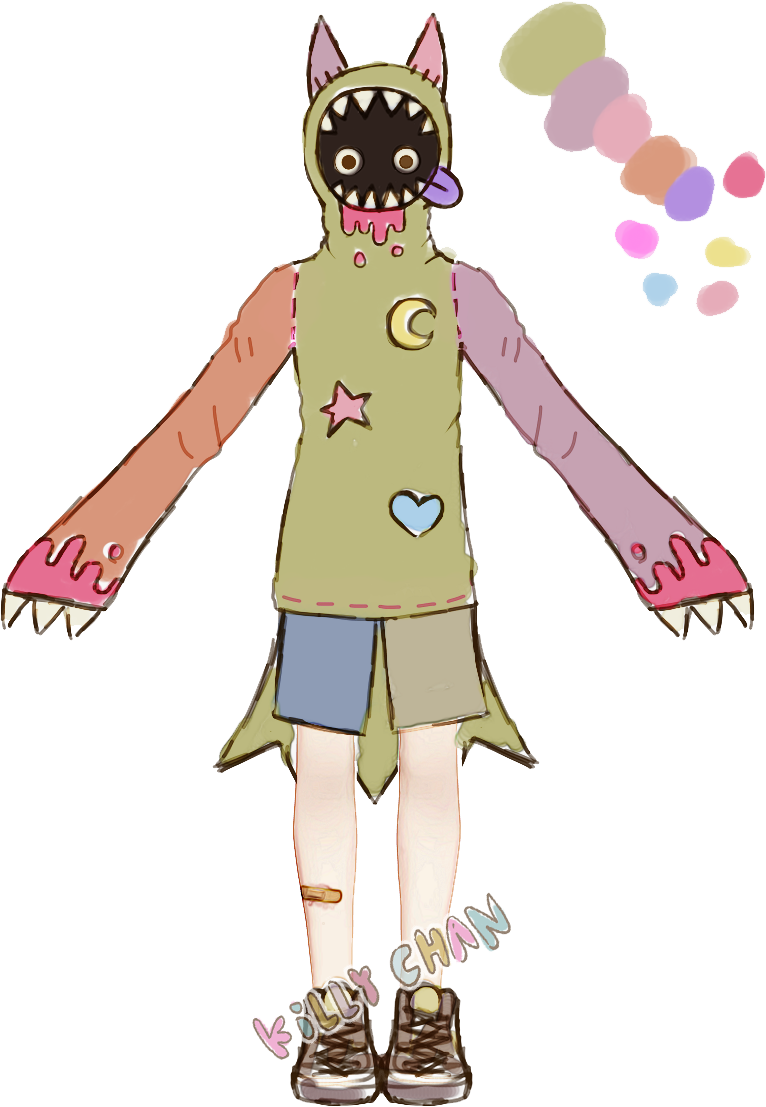 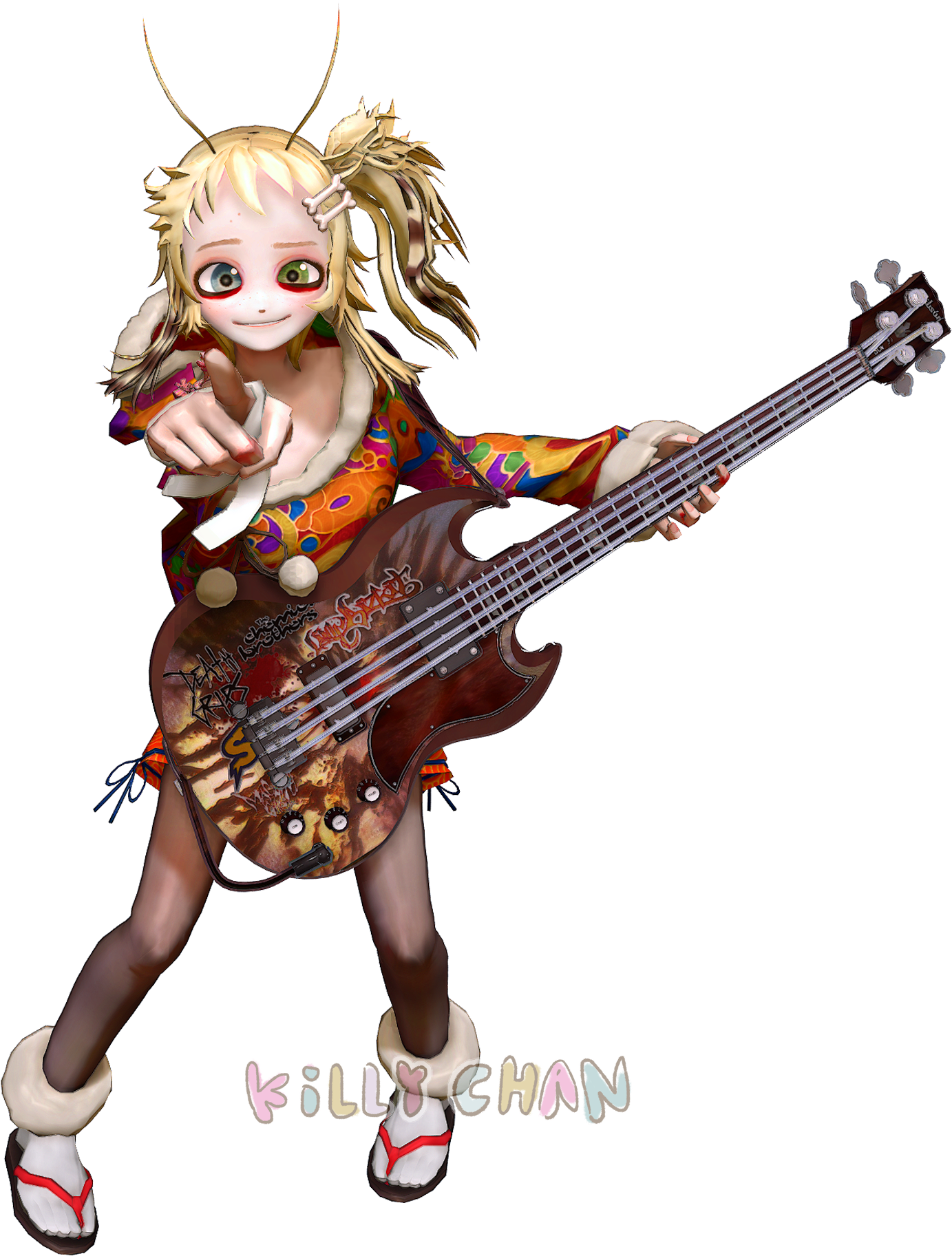 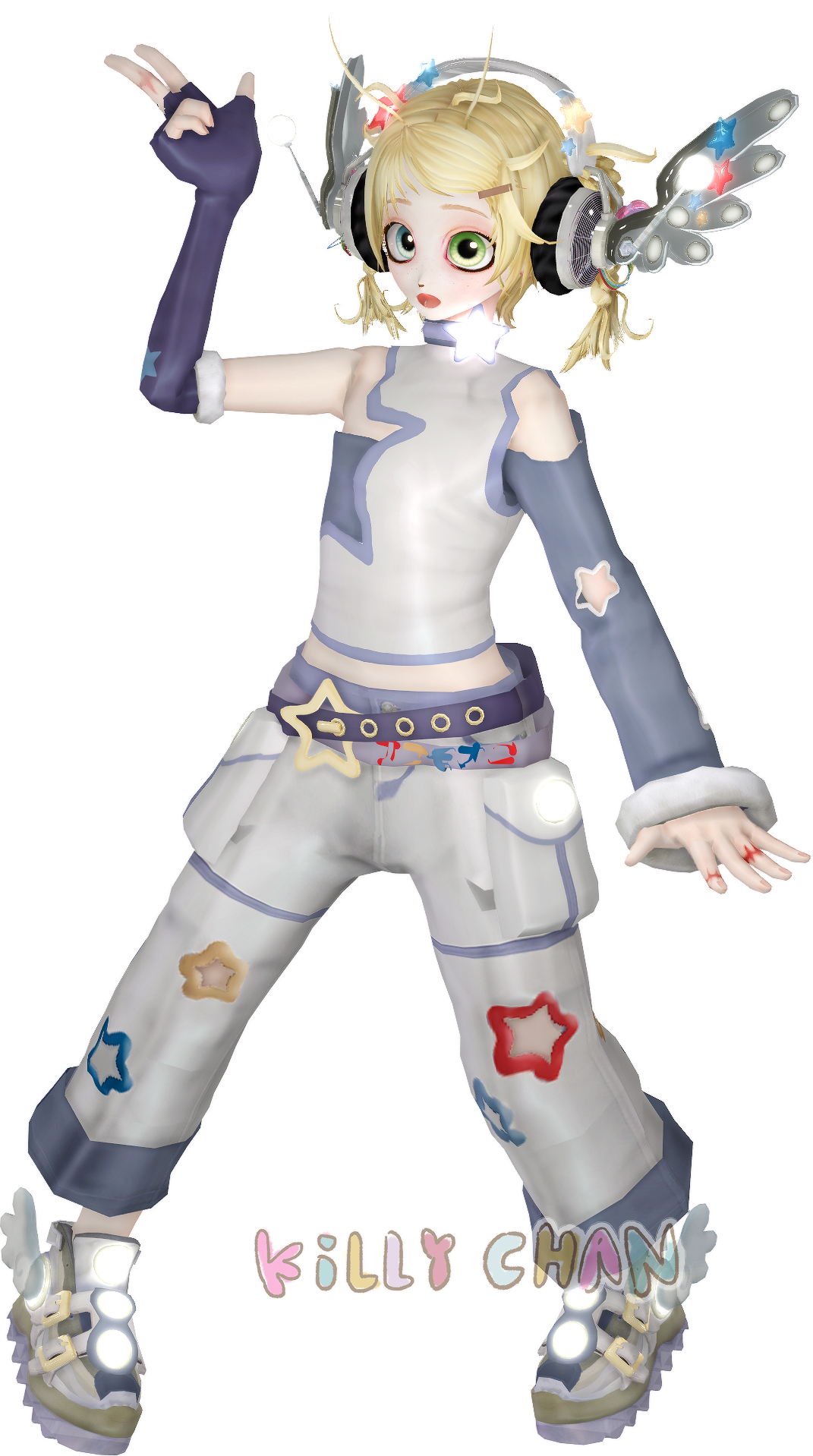 Like everything else in the process, the final result can be very different from the initial idea.
But I'm glad with the outcome even if not everything could be implemented into the final product.

I'll be honest, I've redesigned Killy atleast 6 times before I got an outfit I was finally happy with. When you know your character well and their fleshed out with a clear personality, you may find it easy to create outfits that fit them. This made me worry about Killy's personality. I know it fine but am I able to reflect that into her appearance? ♡ Taking a 2D sketch and recreating in 3D is a difficult curve. To help me get the face right, I create a guide to overlay while in the VroidStudio Program. And it works wonders! ☆ Killy · You Who Is Made Of Goo (reupload)

Music Video planning is also a hard obstacle to over come. Sometimes ideas just dont generate. I listen to a song over and over again trying to think of visuals that go with it. Sometimes it goes super smoothly and I have the entire storyboard in my head! Often, I only have little concepts.

Most of the process is done in PMX Editor! PMX Editor is a Model Editor made for MikuMikuDance which is the freeware animation program I use. With Vroid Studio I create the base of the model. I get free 3D Models and resources from site such as DeviantArt, The Model Resource, and 3D Warehouse. All these sites have 3D models free for personal use. For Models from Model Resource and 3D Warehouse I have to rig them myself and all the textures are edited.

Using SweetHome3D, Metasequoia 4, and PMX Editor, I put together the scenes! I actually start by making a rough layout in Roblox Bloxburg. Then I recreate that layout in SweetHome3D where I can add furniture, doors, and windows. I then export it and put it in Meta4. The process can start to get slow if I use heavy models and my computer can't process it well. But once fixed a bit and exported out of Meta4 I import it into PMX Editor and the rest goes smooth!

SUPERMARKET Episode 1:”How to Be Super Funny” (The first 10 Pages of Episode 1 Script)

SCENE 1: Outside of House
Evan is leaving for a week to take care of his mother. Sam is also away -on a...sabbatical?- communing with old friends, at a dream entity convention. (The audience don’t know of this and are only introduced to Sam for the first time when he comes back, in episode 2, when he goes to Ollie’s baby shower. In the beginning of episode 2, everyone greets and welcomes Sam back home.)Start with: Shot of the house outside. You can see Cookie putting something in the trunk of the smaller car.

Inside of the House, Mudroom. Evan with his carry on is about to say goodbye. They stand in the mudroom.

EVAN
Chuck, here is your inhaler.

EVAN
And Killy here is the melatonin and gummy vitamins. ONE a day, alright?

Killy nods and Evan hands her a jar of gummy vitamins and a bottle of melatonin.

The siblings gasp in jealousy. Ted looks surprised but eager.
[The siblings look over at Ted with their gifts in hand, jaws dropped and angry eyes] >:O

CHUCK
Huh?!
[Chuck looks back and forth at Evan and Ted in total/utter confusion]

Ted opens the knife to display many useful tools.

EVAN
Use it ONLY in emergencies.
[Evan gave Ted specifically the knife because he knows that although he isn’t the oldest, he can be the most responsible and won’t be stupid with it.]

Evan turns around and is about to walk out the door but looks back for a sec.

EVAN
Because he's the oldest! And I wanna test him. Bye, love you!

Evan leaves for his trip.

Cookie stands behind the three siblings with a blank stare. He knew he was being put in charge but the reaction of his younger siblings does not put him at ease.

The siblings all turn around to look at Cookie.

CHUCK
Cookie, do you even know what humans eat?

Cookie is writing down in his notepad while nodding looking determined.

Cookie says as he looks up from his notepad.

SCENE 2: Killy’s Room
It’s the early morning, around 6:40, school starts at 8:00. Start with black. We hear the sounds of someone imitating an alarm clock. Fade in from black to reveal it is Cookie waking Killy up. He is in her face making annoying sounds.

Killy’s eyes fully open and she jolts up in fear. She hits her forehead knocking Cookie back a bit. She rubs her forehead and glares a bit.

Cookie runs off, literally sprints out of Killy’s room and up the stairs to Ted’s room. Killy is looking out her room from her bed where Chuck walks by in his robe and scruffy hair. He was just woken up the same way. He looks up the stairs where Cookie went.

In the distance we hear Cookie start beeping again, stopped by a loud scream from Ted.

Downstairs of House, Kitchen.
Cut to the kitchen downstairs. Chuck and Killy are already seated and Ted, very sleepily rubbing his eyes, joins them at the kitchen island. Cookie places paper lunch bags in front of them. The siblings look in the bags cautiously. They are pretty basic. A sandwich and a juice box with a bag of a few snacks (cut up Carrots, Crackers and Cheese).

CHUCK
Not bad Cookie, you actually made us lunch!

TED
Hey the-there’s a finger in mine!

Ted pulls out a finger from his bag. Cookie quickly swipes it revealing he is missing a finger on his left hand.

COOKIE
Sorry... I-I’m so embarrassed. That wasn’t supposed to be in there.
(Note that Cookie isn’t a good liar and you can tell in his speech, basically, he sounds a lot more calm than embarrassed. Almost laughing.)

Mudroom
Cut to later. It is now 7:31. The siblings are all dressed and packed in front of the door to leave.

KILLY
Cookie, how are you gonna get us to school? You don’t drive.

Chuck does know how to drive, and Evan left the truck at the house. Ted looks at Chuck who seems pretty out of it as he didn’t sleep well.

Outdoors, sidewalk to the school.
Cut to the siblings cheering as Cookie now in his travel form running down the sidewalk jumping up and down as he takes them to the school.

View of the school from the outside.
The school is a medium sized, red brick, rectangular building. It has a large parking lot, a green house, basketball court and a field. Cookie drops them off at the front. They wave goodbye and he walks back home. There are a few other parents dropping off their kids looking rather concerned.
Shapeshifters aren't super out of the ordinary but you don't see them use their powers often, especially like that. Which is why Cookie has a Shapeshifter license he got at 16. The license registers him as status Shapeshifter but also means that he is allowed to shapeshift openly outside.

This section of the episode takes place at the school, but cuts back now and then to Cookie watching the house. There is a second conflict at school.

SCENE 3: Hallway, Chira’s Locker.
Cut to Chira and Killy talking in the hallways before lunch in front of their lockers. Chatter and movement in the background.

Caz walks by and shoves Killy, knocking her into a locker. He just walks away smug and laughing, almost poshly.

CHIRA
You better start running unless you want your face imprinted on the floor!

Caz stares at Chira in fear and runs off.

Lunchtime, Girl’s bathroom at school.
Chira and Killy are hanging out in the bathroom. They like to go there because it’s almost always empty. The bathroom’s are always rumored to be haunted, and it’s true ghosts exist but Chira isn’t scared of them. This is before lunch, Killy is washing her hands and Chira is drawing something on the inside of a bathroom stall door.

There is a slightly crude and simple drawing of a cute cartoon cat. It has the writing Meow! Meow! Around it.

CHIRA
It’s not vandalism if it’s art, Killy. Besides, it's a message of joy to anyone who sees it.

KILLY
Then… let me draw something!

Chira hands the pencil over to Killy who rushes over. Killy looks deep in focus and doodles an equally goofy drawing of a bunny with the writing, “BE HAPPY NOW!”

KILLY (worried, looking back and forth at the drawing and chira)
Huh?!

Hallway, Outside the bathroom.
They leave the bathroom. Outside is Grub and Alfie. Alfie is holding a fast food paper bag with lunch for everyone. Fake brand, something funny like “Hot Dog Worl

Outside of the School, lunch spot/concrete wall.
They sit on a concrete wall together. They share fries, Alfie eats a hotdog and Grub has some chicken wings. Chira has a soda and some onion rings. Killy eats some fries along with the lunch made from Cookie. However when Killy opens her lunch bag and looks inside she yelps and throws the bag off the cliff below them. As the bag falls over and its contents pour out we see another finger! The others gasp in disgust such as, “Oh SICK!” “Is that a finger?” Killy angrily mumbles “God-drat-Cookie!!” They sort of freeze and stare at it and with Killy not wanting her lunch anymore, Alife hands her half of his hotdog.

Killy finishes her lunch and takes a magazine out of her bag to read. Chira is playing a game on her phone (you can hear little blip bloops) and Alfie and Grub are just chatting.

GRUB
Why do my hands look like they have a rash?

ALFIE
That's because they do.

Killy shoves in between them.

KILLY
GUYS LOOK! (holding a Magazine, arms outstretched in front of them) There's a new mall opening up near here!

GRUB
Something finally new to do.

A short girl with a frilly dress and long curled pigtails runs up to them.

She's yelling out, “Hey! Hey!!” waving her arms at them as she runs closer. She almost trips -everyone gasps- but catches herself gracefully. -they sigh in relief.

HILDA (A bit out of breath)
Caz- he…Grrr… HE JUST STOLE MY CDs! He’s been picking on me all week!

They all groan. Sick and tired. Exhausted at Caz’s antics.

Alfie hops off the concrete wall. He puts his hand on Hilda’s shoulder…

Hilda looks hopeful for Alfie to help her.
ALFIE
You can always buy new ones. :)

Hilda’s smile turns instantly into a glare. She shoves Alfie’s hand off her shoulder and kicks him in the shin.

HILDA
Pathetic! I’ll just do it myself!

Hilda storms off while Alfie looks in shock, holding his kicked shin.

KILLY
You should murder him, and then you won’t have to deal with it ever again.

Alfie smiles for a sec at that idea.